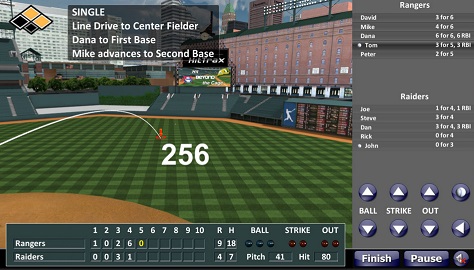 HitTrax is the ﬁrst and only baseball/softball hitting simulator. The technology delivers innovation to baseball players, parents, and coaches by measuring real-time hits and displays live results.

What is a HitTrax League?

Hitting Leagues are the ultimate way for players to get more At-Bats in a competitive game environment. Teams can have 3–5 players.  Games are played using HitTrax which simulates a game in any MLB stadium that is scaled based on the age level of the players.  Games are 6 innings or 30 min, whichever comes first. League standings are kept as well as individual statistics for all teams. Playoffs are held at the end of the season with prizes for the champions.

Cost: $295 per team or $95 per player.  Sign up your team or sign up individually and get drafed on a team. Take advantage of this great opportunity to sharpen your skills in a competitive and fun environment!

Note:  Game times will be determined after registration is closed. Also, single players can sign up and we will draft free agents to other teams.

Enjoy the following video from a previous fundraiser:

OUR SERVICES
CONTACT US
Powered by Top Rated Local®